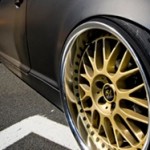 According to the Urban Dictionary, Stance is "to adjust a car's camber, ride height, and spacing, so that the sidewall of the tyre sits as flush as possible with the fender/quarter panel."

Everyone's view on what classes as stance differs, some lower the car and use wheel spacers to push out the wheels so that they are in line with the side panels, others have large amounts of negative camber to push the bottom of the wheels out. Either way, Stance is all down to how your car looks, the ride hight and the wheel position, it is about how the car sits.

Hellaflush is another word for stance. 'Hella', meaning very in the San Francisco Bay area, and 'flush' referring to the fitment of the wheels and tyres, as well as getting your car as close/flush to the ground as possible. It originated from drift cars that were low and had their wide wheels pushed out as far as possible.

The majority of cars remain functional after they have been modified, however some cars take their interpretation of stance to the extremes creating a car that becomes more for show than a performance upgrade. The best examples of stance manage to get a balance of form and function.