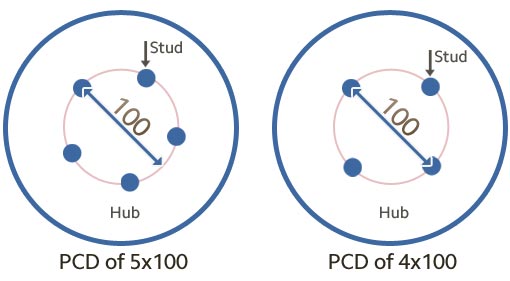 PCD, or Pitch Circle Diameter if you aren't a fan of acronyms, is the diameter of the wheel studs through the centre of the hub.

PCD fitments are a measurement showing the number of studs/bolt holes followed by the distance they are spaced out. The distance is usually shown in millimetres. So a PCD of 4x114.3 means that there are 4 studs or bolt holes evenly spaced around an circle with a diameter of 114.3mm.

The PCD on a 4 or 6 stud car is easy to work out as it is simply the straight line distance between two opposing studs, making sure you measure from the centre of the wheel stud.

Working out the PCD on a car with an odd number of studs or bolts is more difficult. The centre of each wheel stud sits on an imaginary circle, as you can see from the images. One of the easiest ways to work out your PCD is to measure the distance between the centre of two adjacent studs or bolt holes and multiply it by 1.7012.